Dogecoin vs. Bitcoin: Which Is Better For Getting Profit? 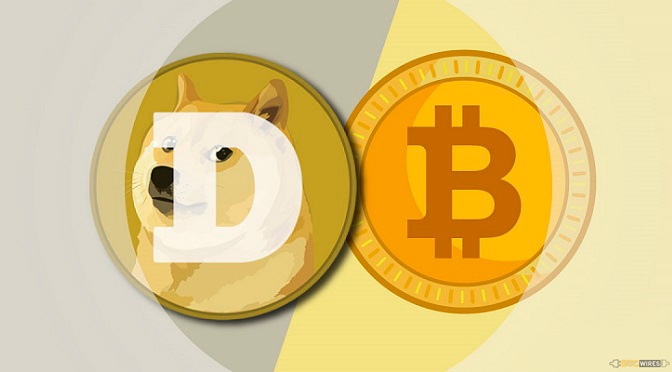 Dogecoin and Bitcoin have recently made impressive waves in the market. For Dogecoin, the market capitalization recently surged over $50 billion. The coin has grown with over 2400% increase. This was mostly fueled by influential tweets in support of the coin, especially from Elon Musk and some popular investment associations.

Simultaneously, Bitcoin remains a leading coin in the crypto market and one of the most remarkable in the past few months. Last year, Bitcoin rose in value with over 600% increase, making it retain its valuable position in the crypto market. However, both coins have also witnessed sizable falls recently. So, which of the two coins is profitable to buy? Let’s dive in thoroughly!

Exploring The Differences Between Dogecoin and Bitcoin

Doge vs. BTC Development: Dogecoin was founded by Jackson Palmer and Billy Markus, who both had strong backgrounds in programming. When the Dogecoin whitepaper was released, the founders admitted to coding the coin leveraging Bitcoin’s structure. As such, there is great similarity between the two coins in terms of blockchain since Dogecoin operates as Bitcoin’s replica. However, despite the similarities, there are a host of differences between the two.

Satoshi Nakamoto introduced Bitcoin to revolutionize the digital currency space. As a digital currency, BTC’s creator incorporated effective structures that made BTC circumvent the existing double-spend issue in the crypto space. Double spend was a problem, leveraged by hackers to make double payments. This was obviously a significant problem that would ruin any monetary system. However, through the introduction of timestamps, BTC was able to overcome this issue.

Dogecoin and Bitcoin’s purpose: The two coins differ concerning their purpose. Bitcoin entered the market to serve as an alternative to the traditional monetary system. Nakamoto aimed to create a system that will empower the masses and truly strengthen the financial system. This was to stand against the conventional fiat approach that focused on dominating the human population by manipulating the system, as against supporting prosperity.

The intentions of Bitcoin can be clearly gleaned from its coding, a part of which quotes the following statement “The Times 03/Jan/2009 Chancellor on brink of second bailout for banks.” The quote references a Times headline at the period BTC was created, indicating the necessity of a viable monetary system alternative.

However, Doge cannot be said to follow this same pattern. Firstly, the creators admit to inventing the coin as a joke. They wanted to make people laugh, and this reflects in the fact that the coin’s name originated from a meme.

However, following the coin’s introduction, it has enjoyed impressive goodwill in the market, which shot the coin’s value up in no time. Consequently, the creators have focused on spending returns on humanitarian projects. Although the initial gains on Doge after launch didn’t last for long, they indicated a potential future for the coin.

Doge and its Humanitarian Causes: The pattern with which Doge entered the market has created a supportive set of followers who are passionate about humanitarian causes. Following its launch, the Doge community has engaged in several community-building projects.

One of the remarkable ones remains the clean water initiative organized in Kenya, which achieved great success. The community has also helped communities with dog training assistance, among several laudable projects. Today, Doge is closely associated with the goodwill spirit.

Dogecoin vs. Bitcoin: Which Is Better To Make Profit?

Dogecoin vs. bitcoin is a trendy topic among crypto investors. Although the two coins seem to have enjoyed good market runs, Dogecoin cannot yet reach the heights bitcoin has attained. Bitcoin has become a symbol of financial freedom, and it’s more valuable to own. Companies are now converting their reserves to Bitcoin, thereby shooting up BTC’s value in the market.

However, this doesn’t mean that investors cannot gain from owning Dogecoin. The coin enjoys immense goodwill among high-profile crypto investors, making its market value subject to jumping up sporadically. As such, while Bitcoin may appear as the best to make a profit from due to its stability, Dogecoin poses as a prominent newcomer with lots of returns to offer in time.

Why Choose When You Can Use The Two?

Though Bitcoin Dogecoin narrative often makes crypto holders wonder which coin to choose, there are a few efficient platforms that can operate with many cryptos simultaneously. Surely, crypto oriented spheres, including gambling, provide users with a special offer. With 30 coins to choose from, 1xBit offers you a seamless avenue to make the most of your cryptocurrencies work for you.

Whether you hold Doge or BTC, you will benefit from the vast selection of sporting events and various casino games at 1xBit. Yet, you remain eligible for up to 7 BTC welcome bonus for the first 4 deposits, with access to instant payouts.

Cryptos continue to grow rapidly. It’s why you should play bets on platforms that allow you to hold and use many of them.